The Court & Tribunal System in Alberta

by abenvirolaws in Fundamentals of Environmental Law

In order to understand the court system in Alberta, it helps to remember a few things.

First, the courts are hierarchical. This means that each level can overturn or change decisions from the lower levels.

The Provincial Court of Alberta hears the majority of lower-level criminal offences which often include quasi-criminal environmental offences.

For a better understanding of how this works, here is a chart from the Government of Alberta which illustrates the Canadian courts system: 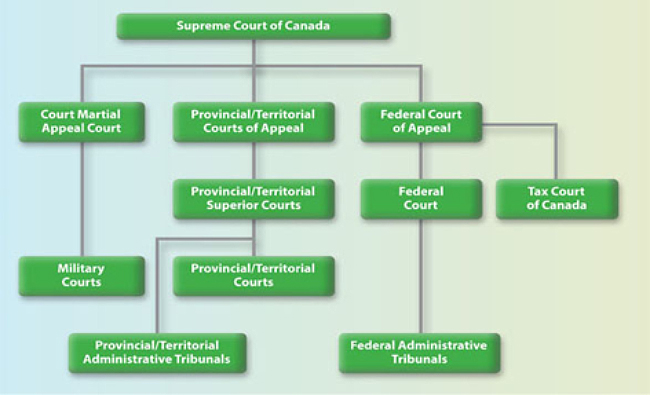 [2]Courtesy of the Government of Canada

A number of environmental law decisions are also heard at the tribunal level. Tribunals run parallel to the court system and may resemble a court because they are authorized to make decisions when a dispute arises.

There are two main differences between a court and a tribunal. First, a tribunal is set up to be a faster, easier and less formal process for those individuals who may seek out a tribunal’s help and second, those individuals who sit on a tribunal often have specific knowledge about the tribunal topic but may not be lawyers, judges, or experts in the law in general. For example, environmental tribunals may be comprised of environmental lawyers, scientists and engineers.